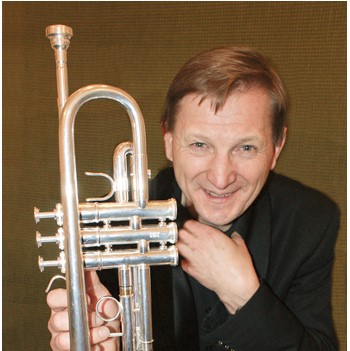 Roman Gryń (full professor) finished the State Secondary School of Music in Gdańsk-Wrzeszcz in 1979. The same year he began studying trumpet at the Academy of Music in Gdańsk, and a year later he continued his music studies in Wiesław Woźniecki’s trumpet class at the Fryderyk Chopin Academy of Music in Warsaw, graduating in 1983. In 1982 and 1985 he was a participant in the Summer Courses in Music Interpretation on Brass Instruments in Duszniki-Zdrój, taught by A. Miczka and T. Dokszycer. In 1981 he received an award of distinction in the Young Trumpeters Competition in Pabianice, and in 1985 he won the 3rd Prize in the Trumpet Playing Competition in Gdansk. In the years 1983-1986 he worked with the National Philharmonic Orchestra in Warsaw. He then became a soloist of the Pomeranian Philharmonic Orchestra in Bydgoszcz. Since 1988 he has worked as a soloist and leader of the trumpet section in the Poznan Philharmonic Orchestra. The same year he started his academic career at the Feliks Nowowiejski Academy of Music in Bydgoszcz, where he teaches his own trumpet class (since 1997 as professor). He holds a similar position at the Ignacy Jan Paderewski Academy of Music in Poznań. He has also been a teacher at Poznań music schools, his students being awarded prizes at a number of national and international competitions and festivals. He has sat on juries for such competitions as the National Competition for Young Musicians in Szczecinek (1996, 1998), the International Brass Instruments Competition in Gdansk (1996, 1998), the Konin Province Governor Award Music Competition in Konin (1995, 1997, 1998), the ’Macro-Regional Auditions’ Competition for School Students of Brass Instruments in Poznań (1997). He has conducted a number of music and music teaching workshops such as the International Music Workshop in Szczecin (1995, 1996, 1998), music workshops in Olsztyn (1997), Płock (1995, 1998), Toruń (1998) and Lenno (1998); music teaching workshops in Zielona Góra (1995), Głogów (1997), Białystok (1995) and Koszalin (1997). He co-authored the programme of the 2nd National Festival for Trumpeters in Kalisz in 1999. For his pedagogical work he received awards from the Rector of the Academy of Music in Bydgoszcz in 1996 and 1998, and in 1998 he was also presented with a distinction award for preparing his student for participation in the 27th National Competition for Young Musicians in Szczecinek.