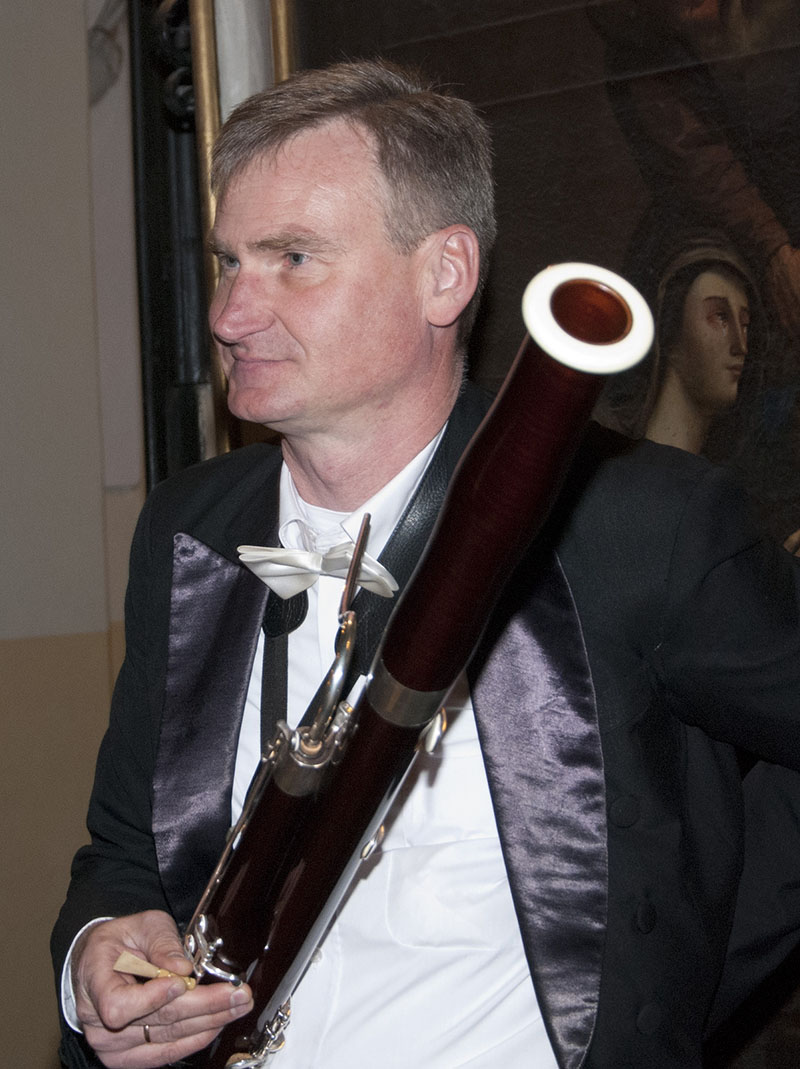 Grzegorz Dąbrowski (associate professor) graduated from the Fryderyk Chopin Academy of Music in Warsaw in 1992, having been a student in Bogumił Gadawski’s bassoon class. In 1995 he started his music studies at Yale University (USA) with Frank Morelli, earning his Master of Music degree in 1997. He was the winner of the 1st prizes in competitions held in Koszalin (1986) and Włoszakowice (1992).

While still being a student, he worked with the Warsaw Chamber Orchestra. In the years 1990–2007 he played as the principal bassoon with such ensembles as the Camerata Academia Orchestra in Warsaw (1990-95), the Polish Radio Orchestra in Warsaw (1992-95), the Polish Chamber Philharmonic Orchestra in Sopot (1994-1995); the Philharmonia Orchestra of Yale, the Yale Symphony Orchestra, the New Haven Symphony Orchestra, the Norwalk Symphony Orchestra, the Lyric Mountain Festival Orchestra (USA, 1995-97); the Roma Musical Theatre ensemble in Warsaw (1997-2005), and the Symphony Orchestra in Płock (1997-2007). In 1999, he was auditioned for and admitted to the Polish Festival Orchestra under Krystian Zimerman, with whom he made tours across Europe and the USA, and recorded a CD album. At that time he also began his long-term collaboration with the National Philharmonic Orchestra and the Sinfonia Varsovia Orchestra, the collaboration continuing until the present day. It is with these ensembles that he has had an opportunity to perform an extensive repertoire of symphonic music, including some new works (also those publicly presented for the first time) by leading contemporary Polish composers. He has played under such renowned conductors as Witold Lutosławski, Krzysztof Penderecki, Jerzy Maksymiuk, Jan Krenz, Henryk Czyż, Jerzy Semkow, Stanisław Skrowaczewski, Gabriel Chmura, Kazimierz Kord, Antoni Wit, Jacek Kaspszyk, Michael Corboz, Kurt Masur, Marc Minkowski, Shinik Hahm, or Christopher Warren-Green.

Grzegorz has performed at a number of festivals at home and abroad, including the prestigious Warsaw Autumn Festival, the Wratislavia Cantans Festival in Wrocław, the Ludwig van Beethoven Easter Festival (organized by the Ludwig van Beethoven Association), La Folle Journee in Nantes (France), the Schleswig-Hollstein Music Festival (Germany), as well as in many well-known concert halls in Europe and the rest of the world.

Throughout his artistic career he has also performed as a soloist and a member of chamber ensembles. He has played bassoon concertos by A. Vivaldi, W.A. Mozart, and C.M. Weber in Poland with the Lublin Philharmonic Orchestra, the Jelenia Góra Philharmonic Orchestra, the Pomeranian Philharmonic Orchestra, the Crown Tribunal Orchestra in Lublin, the Symphony Orchestra of Płock, the Toruń Chamber Orchestra, and the Classical Orchestra of Piła, and in the USA with the Connecticut Virtuosi Chamber Orchestra. As a chamber musician he also frequently works with artists from Bydgoszcz. In 2012, for example, with the pianist Magdalena Swatowska, he recorded an album featuring sonatas by C. Saint-Saens, Ch. Koechlin and P. Hindemith. Since 1998 he has been teaching his own bassoon class at the Feliks Nowowiejski Academy of Music in Bydgoszcz.